Scientists make a touch tablet that rolls and scrolls 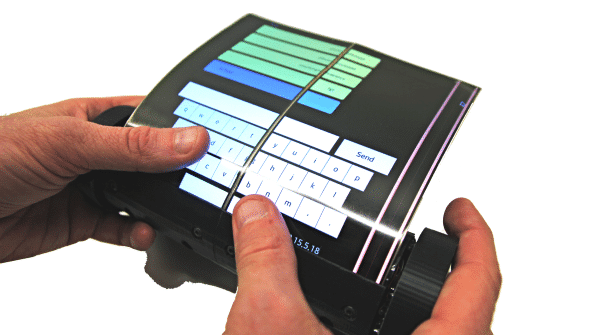 Research scientists at Queen’s University’s Human Media Lab have built a prototype touchscreen device that’s neither smartphone nor tablet but kind of both — and more besides. The device, which they’ve christened the MagicScroll, is inspired by ancient (papyrus/paper/parchment) scrolls so it takes a rolled-up, cylindrical form factor — enabled by a flexible 7.5inch touchscreen housed in the casing.

This novel form factor, which they made using 3D printing, means the device can be used like an erstwhile rolodex (remember those?!) for flipping through on-screen contacts quickly by turning a physical rotary wheel built into the edge of the device. (They’ve actually added one on each end.)

Then, when more information or a deeper dive is required, the user is able to pop the screen out of the casing to expand the visible display real estate. The flexible screen on the prototype has a resolution of 2K. So more mid-tier mobile phone of yore than crisp iPhone Retina display at this nascent stage.

The scientists also reckon the scroll form factor offers a pleasing ergonomically option for making actual phone calls too, given that a rolled up scroll can sit snugly against the face.

Though they admit their prototype is still rather large at this stage — albeit, that just adds to the delightfully retro feel of the thing, making it come over like a massive mobile phone of the 1980s. Like the classic Motorola 8000X Dynatac of 1984.

While still bulky at this R&D stage, the team argues the cylindrical, flexible screen form factor of their prototype offers advantages by being lightweight and easier to hold with one hand than a traditional tablet device, such as an iPad. And when rolled up they point out it can also fit in a pocket. (Albeit, a large one.)

They also imagine it being used as a dictation device or pointing device, as well as a voice phone. And the prototype includes a camera — which allows the device to be controlled using gestures, similar to Nintendo’s ‘Wiimote’ gesture system.

In another fun twist they’ve added robotic actuators to the rotary wheels so the scroll can physically move or spin in place in various scenarios, such as when it receives a notification. Clocky eat your heart out.

“We were inspired by the design of ancient scrolls because their form allows for a more natural, uninterrupted experience of long visual timelines,” said Roel Vertegaal, professor of human-computer interaction and director of the lab, in a statement.

“Another source of inspiration was the old rolodex filing systems that were used to store and browse contact cards. The MagicScroll’s scroll wheel allows for infinite scroll action for quick browsing through long lists. Unfolding the scroll is a tangible experience that gives a full screen view of the selected item. Picture browsing through your Instagram timeline, messages or LinkedIn contacts this way!”

“Eventually, our hope is to design the device so that it can even roll into something as small as a pen that you could carry in your shirt pocket,” he added. “More broadly, the MagicScroll project is also allowing us to further examine notions that ‘screens don’t have to be flat’ and ‘anything can become a screen’. Whether it’s a reusable cup made of an interactive screen on which you can select your order before arriving at a coffee-filling kiosk, or a display on your clothes, we’re exploring how objects can become the apps.”

The team has made a video showing the prototype in action (embedded below), and will be presenting the project at the MobileHCI conference on Human-Computer Interaction in Barcelona next month.

While any kind of mobile device resembling the MagicScroll is clearly very, very far off even a sniff of commercialization (especially as these sorts of concept devices have long been teased by mobile device firms’ R&D labs — while the companies keep pumping out identikit rectangles of touch-sensitive glass… ), it’s worth noting that Samsung has been slated to be working a a smartphone with a foldable screen for some years now. And, according to the most recent chatter about this rumor, it might be released next year. Or, well, it still might not.

But whether Samsung’s definition of ‘foldable’ will translate into something as flexibly bendy as the MagicScroll prototype is highly, highly doubtful. A fused clamshell design — where two flat screens could be opened to seamlessly expand them and closed up again to shrink the device footprint for pocketability — seems a much more likely choice for Samsung designers to make, given the obvious commercial challenges of selling a device with a transforming form factor that’s also robust enough to withstand everyday consumer use and abuse.

Add to that, for all the visual fun of these things, it’s not clear that consumers would be inspired to adopt anything so different en masse. Sophisticated (and inevitably) fiddly devices are more likely to appeal to specific niche use cases and user scenarios.

For the mainstream six inches of touch-sensitive (and flat) glass seems to do the trick.