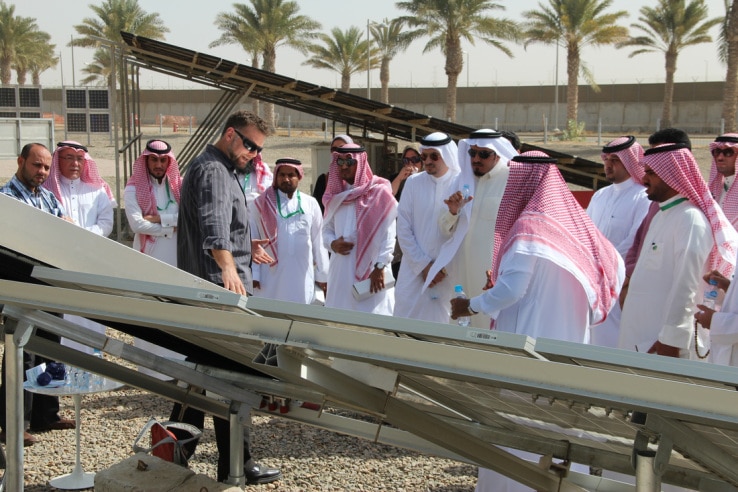 Bérénice Magistretti is a freelance writer focusing on startups and entrepreneurship and the former communications manager for Seedstars World. She is based in Geneva, Switzerland.

More posts by this contributor:

How to join the network

In Saudi Arabia, a country known more for its vast oil reserves than its commitment to renewable energy, a small startup called NOMADD Desert Solar Solutions has developed a new way to clean up the process of solar energy production — literally.

Even the Saudi kingdom realizes that despite the attractively low prices of fossil fuels, solar energy is gaining momentum.

Solar panels are therefore going to play an increasingly important role in the global energy market this year.

But one challenge that some countries face is the dust build-up forming on desert-based panels, which considerably decreases the amount of energy being produced (there can be up to 60% energy yield losses during and after sand storms.)

NOMADD is a Saudi-based startup that has developed a viable solution to this problem: The NO-water Mechanical Automated Dusting Device, a smart and ecological desert solar panel cleaning system.

The NOMADD is a long tube (3-5 meters) built in a sleek and simple design that brushes away the panel dust. It can handle large misalignments or settling in the arrays and doesn’t rest any weight on the panels as it runs on rails. The secret, as with painting, is in the angle of the brush.

It’s a viable alternative to the existing solution — hiring janitors with water hoses. Labor looks cheap, given the size of a large scale solar installation and add all the costs associated with cleaning the panels (time, water, etc.) expenses mount up. NOMADD is waterless and fully automatic, making the whole process much less expensive.

“You basically push a button on your smartphone and your whole array is clean within half an hour,” explains Georg Eitelhuber, the co-founder and chief technology officer “The array is 99.5% as clean as if you were cleaning with water.”

Eitelhuber is an Australian Mechanical Engineer who moved to Saudi Arabia in 2009, where he became a Physics high school teacher at KAUST (King Abdullah University of Science and Technology). He simultaneously completed a Masters in Renewable Energy and began collaborating with Energy Oasis, a campus-based testing area for companies to try out their new technologies.

Noticing that there were no effective solutions to cleaning desert-based solar panels, Eitelhuber saw an opportunity to solve a big problem in the industry.

“I believed then, and I still believe now, that solar is going to be huge in the Middle East,” says Eitelhuber.

After collecting data, he began building prototypes out of LEGO for about 18 months, involving his students in the project. Once the model was completed in 2012, Eitelhuber took it to the Tech Transfer office of KAUST, got it patented and eventually received seed funding in the amount of $200,000.

This financial boost allowed Eitelhuber to get a technician on board, start carrying out deeper tests and build a bigger model. With the backing of the Solar Research Center at KAUST, the team worked on making the product simpler and lighter, integrating it into different solar panels. NOMADD has been commercialized but is still in beta mode.

They have sold a couple of models and are fostering strong partnerships with Engineering Procurement Construction Firms (EPCs), who are the main distributors in this sector.

Basically, government entities put out tenders for projects and it’s up to the EPCs to place bids. They decide what panels they’re going to use, define the understructure, the operations and maintenance, etc. They then put together a package and stick that package in for tender.

“What we’re offering them is a way to value add their proposals by integrating us in the design stage and offering us as part of their bid,” explains Eitelhuber.

NOMADD has entered a booming market. The Saudi oil Minister announced in 2014 the launch of a $100 billion solar program for Saudi Arabia. Other markets like the UAE, Jordan, Egypt and India are also hot for solar energy.

“The biggest challenge for us, [is] we’re selling a solution to a problem that most people don’t know about”, explains Eitelhuber.

The startup has just signed a term sheet for a $1 million Series A funding round. “This is what we need to get this project commercialized,” says Eitelhuber.