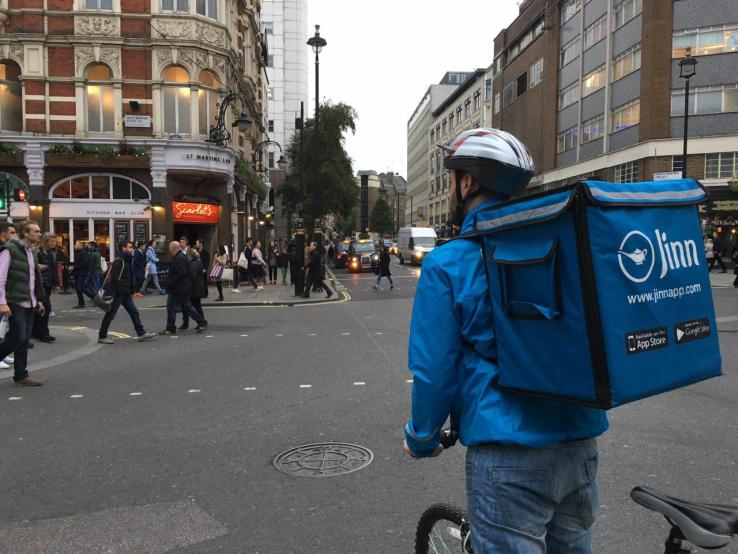 Just a couple of weeks after the closure of Valk Fleet, Delivery Hero’s B2B food delivery startup, not all waters are choppy in London’s on-demand delivery space.

After months of rumours that the startup was raising, Jinn, the same-hour ‘shop on your behalf’ delivery app, is disclosing $7.5 million in Series A funding, money that it plans to use to expand to more UK cities — the service is currently in central London and most recently Manchester — and to reach Southern Europe.

Leading the round is Samaipata Ventures (a new VC started by the founders of La Nevera Roja, the take-out ordering service sold to Rocket Internet last year for $100 million), Elderstreet, Bull Partners and existing angel investors.

Notably missing, however, are any of London’s top tier (or otherwise) VCs, perhaps evidence that investors are cooling on the on-demand space or simply put off by the deep pockets of Deliveroo, Rocket Internet, Uber and Amazon. This despite Jinn having healthy unit economics and growth, according to data I’ve seen which was shopped around to potential investors late last year. That said, participation of Samaipata Ventures looks strategically like a good fit.

In a call, Jinn co-founder and CEO Mario Navarro tells me the startup is now seeing 50,000 monthly orders via its app in Central London just two years after launch. This, he says, equates to an annual run rate of $25 million in sales (that is revenue passed through the app, not Jinn’s cut alone), and seeing the company grow 30 per cent month on month with customers ordering on average once a week. Perhaps crucially, Jinn is now also hitting an average delivery time of 32 minutes, down from 45 minutes six months ago.

Similar to Postmates in the U.S. (who still haven’t expanded to Europe, despite saying that it plans to do so) and local competitor Quiqup, which is backed by Delivery Hero and Rocket Internet, Jinn lets you order anything locally for delivery — not just food.

You simply browse the location-based app for items you want to purchase, or enter your request in a free form text field, and one of the startup’s self-employed couriers goes to the store, purchases the item and delivers it to you. Another key differentiator is that the service runs 24/7.

Navarro describe’s Jinn’s proposition as “demand driven” because customers can order anything they choose and aren’t restricted to a catalogue of items or a single vertical, such as restaurant food in the case of Deliveroo or Take Eat Easy.

This, rather cleverly, means that Jinn can launch in new locations before it has partnerships with merchants. Not only is this good for the consumer as they get unlimited choice but it also acts as a gateway to eventually signing those partnerships, which Jinn claims now stand at 500.

To that end, longer term, Jinn’s business model favours official partnerships with merchants in two ways. First is the amount of commission it’s able to charge, which is then used to lower the cost of delivery for the end consumer. From data I’ve seen, here’s how it roughly breaks down: For non-partners, Jinn charges customers a delivery fee based on distance and 10 per cent of the price of the basket. For partners, the company charges customers a significantly lower delivery fee — in the region of £2.50 — and around 25 per cent of the basket.

But there’s another major advantage of partnering, too, and that’s the ability to better integrate the Jinn app with a merchants stock and ordering process. Specifically, partners are given a tablet with Jinn’s proprietary app installed, which enables them to receive orders, change the preparation time, update their stock and browse their order history. The result is that, in theory, Jinn can decrease delivery times because it can better predict preparation time and automate dispatching. 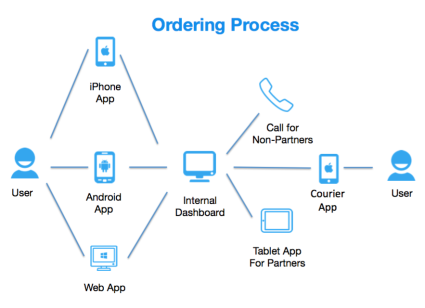 That plays into the challenge of any on-demand delivery company, which is the number of deliveries required per hour to break even and then turn a profit. In the case of Jinn, I understand the break even point currently sits at just over one delivery an hour, and while running at full capacity the startup is delivering closer to two. That’s impressive for what is a significant tech and people challenge, and compares favourably to other companies in the space.

“On-demand will represent over 50 per cent of the e-commerce market in the next few years,” says Navarro, and that by leveraging its existing technology platform Jinn aims to become the leading service in Europe. “Jinn’s goal is to bring together the convenience of shopping online with the instant gratification of shopping on the high street”.