Klarity, a member of the Y Combiner 2018 Summer class, wants to automate much of the contract review process by applying artificial intelligence, specifically natural language processing.

Company co-founder and CEO Andrew Antos has experienced the pain of contract reviews first hand. After graduating from Harvard Law, he landed a job spending 16 hours a day reviewing contract language, a process he called mind-numbing. He figured there had to be a way to put technology to bear on the problem and Klarity was born.

“A lot of companies are employing internal or external lawyers because their customers, vendors or suppliers are sending them a contract to sign,” Antos explained They have to get somebody to read it, understand it and figure out whether it’s something that they can sign or if it requires specific changes.

You may think that this kind of work would be difficult to automate, but Antos said that  contracts have fairly standard language and most companies use ‘playbooks.’ “Think of the playbook as a checklist for NDAs, sales agreements and vendor agreements — what they are looking for and specific preferences on what they agree to or what needs to be changed,” Antos explained.

Klarity is a subscription cloud service that checks contracts in Microsoft Word documents using NLP. It makes suggestions when it sees something that doesn’t match up with the playbook checklist. The product then generates a document, and a human lawyer reviews and signs off on the suggested changes, reducing the review time from an hour or more to 10 or 15 minutes. 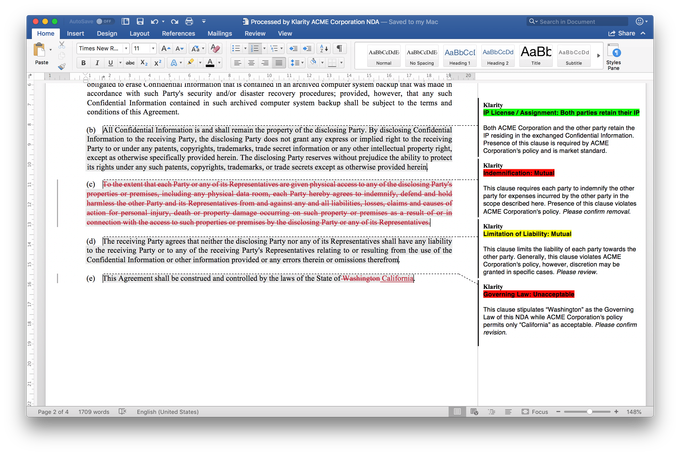 They launched the first iteration of the product last year and have 14 companies using it with 4 paying customers so far including one of the world’s largest private equity funds. These companies signed on because they have to process huge numbers of contracts. Klarity is helping them save time and money, while applying their preferences in a consistent fashion, something that a human reviewer can have trouble doing.

He acknowledges the solution could be taking away work from human lawyers, something they think about quite a bit. Ultimately though, they believe that contract reviewing is so tedious, it is freeing up lawyers for work that requires a greater level of intellectual rigor and creativity.

Antos met his co-founder and CTO, Nischal Nadhamuni, at an MIT entrepreneurship class in 2016 and the two became fast friends. In fact, he says that they pretty much decided to start a company the first day. “We spent 3 hours walking around Cambridge and decided to work together to solve this real problem people are having.”

They applied to Y Combinator two other times before being accepted in this summer’s cohort. The third time was the charm. He says the primary value of being in YC is the community and friendships they have formed and the help they have had in refining their approach.

“It’s like having a constant mirror that helps you realize any mistakes or any suboptimal things in your business on a high speed basis,” he said.

Do NOT follow this link or you will be banned from the site!