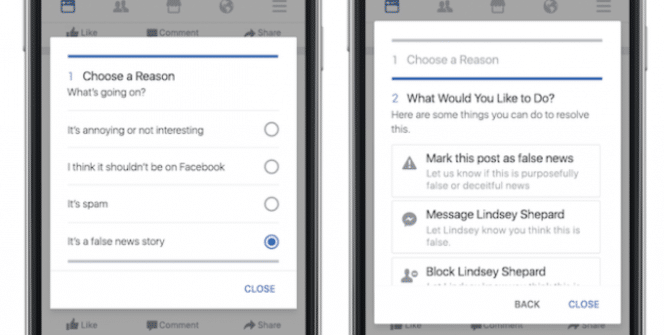 A new way to attack Facebook is to fraudulently report a news story as false in hopes of reducing its visibility, either because someone wants to censor it or just doesn’t agree with it. Sometimes known as “brigading”, a concerted effort by trolls to flag a piece of content can reduce its visibility. Facebook now sends stories reported as false to third-party fact checkers, and these purposefully inaccurate reports can clog the already-overcrowded queues that fact checkers struggle to worth through.

That’s why Facebook gives users a trustworthiness score ranging from 0 to1 dependon the reliability of their flags of false news, the Washington Post reports. If they flag something as false news but fact checkers verify it as true, that could hurt their score and reduce how heavily Facebook factors in their future flagging. If users consistently report false news that’s indeed proven to be false, their score improves and Facebook will trust their future flagging more.

Facebook’s News Feed product manager Tessa Lyons confirmed the scoring system exists. There’s currently no way to see your own or someone else’s trustworthiness score. And other signals are used to compute the score as well, though Facebook won’t reveal them for fear of trolls gaming the system.

This isn’t the only way Facebook ranks users, though. It assigns you a shifting score of affinity towards each of your friends that determines how frequently you see them in the News Feed. This “friend ranking” score is essentially a measure of graph distance from you to someone else. 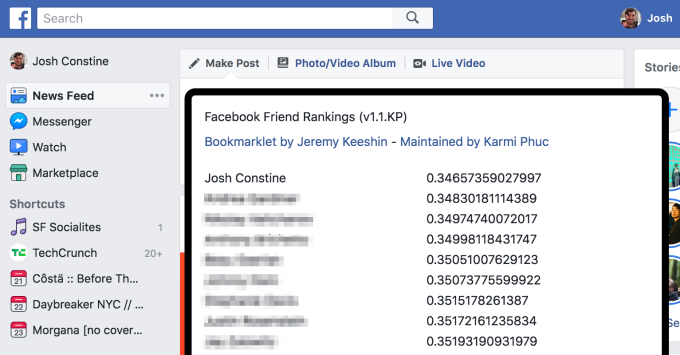 If you like a ton of someone’s posts, get tagged in photos with them, search for them, view their profile, communicate with them, have lots of mutual friends, are in the same Groups, and have similar biographical characteristics like location and age, your score towards them is lower and you’ll see more of them in feed. However, they have a different score for you depending on their behavior, so constantly viewing someone else’s profile won’t make you show up in their feed more if they don’t reciprocate the interest.

I first reported on these friend scores almost exactly seven years ago, and you can still view them for yourself using this browser bookmarklet built by Jeremy Keeshin. Visit this site, drag the “Facebook Friends Rankings” link into your desktop browser’s bookmark bar, open Facebook while logged in, and tap the bookmarklet to reveal the Friend Ranking scores of your friends. It snoops the Facebook JavaScript to pull out the scores. The people you see at the top are who you’re closest to.

Facebook clearly The need for this score highlights the difficulties of Facebook’s battle against fake news. Between subjectivity and purposeful trolling, there’s a lot noise coming in with the signal about what should be removed. Anyone saying Facebook should have easily solved the fake news problems is likely underappreciating the nuance required and the intelligent human adversaries Facebook must defeat.

Facebook has a huge array of signals it can use to calculate Friend Rankings or trustworthiness scores. The question will be whether it can intelligently sort those signals to make coherent inferences about what to show us and when to believe us.